The Anti-GMO Movement Continues To Disappoint 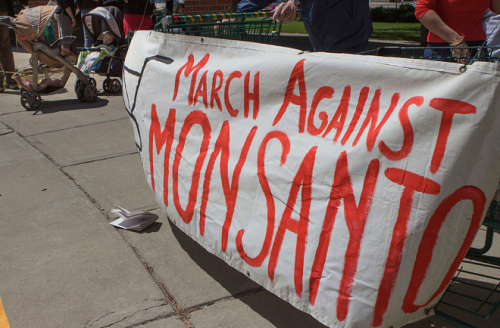 1.  What does it say about a movement when some of its loudest voices refuse to engage in public discourse with any individuals who may have opinions  different from their own?

2.  What does it say about a movement when some of its loudest voices freely circulate highly sensationalized but completely unsubstantiated data – yet refuse to stand up to challenges to confirm that data?

3.  What does it say about a movement when activists march on city streets carrying signs that are deliberately designed to scare people with skewed, false or unrelated data – and they don’t even know it?

I have a personal reason for writing this post.  I used to be an anti-GMO blogger as many readers know and it was just these types of questions that, when answered, compelled me to make the only decision a rational, thinking person could make – to cut and run!

I still observe the movement – from the perspective of my rear view mirror.  As my Honda pulls further and further away, the hype is getting smaller, the fear fading around each new bend.  And the void-of-information-coat rack that the movement hangs its hat on?  That is the one thing in the movement that gets bigger as I settle into cruise control.  I know the activists mean well and think they are saving the world but all I have to say is bub-bye.  This isn’t for me.

Let’s get into more detail about the questions above, shall we?

What does it say about a movement when some of its loudest voices refuse to engage in public discourse with any individuals who may have opinions  different from their own?

On June 4 there was to be an unprecedented debate at the CATO Institute in Washington DC.  Originally dubbed  “The Great Biotechnology Debate:  Food and Farming in the Balance” – it was to feature prominent spokespeople from both sides of the genetically modified table.  We are talking heavyweights here.  From the anti-GMO side we had the movement’s leading crusader Jeffrey Smith, founder of the Institute of Responsible Technology.  Alongside Smith via Skype was to be Gilles-Éric Séralini, well-known in both camps for his controversial study linking tumor growth on rats to being fed GM corn from birth.  Balancing out the roundtable were pro-science proponents Kevin Folta, University of Florida plant geneticist and Jon Entine of the Genetic Literacy Project.  Sparks were sure to fly but some understanding would eventually be reached, right?

Wrong.  Both Smith and Séralini cancelled citing less than convincing reasons for doing so.  The event will still go on but with a new name and different format.  Read Entine’s account of the story here:  Anti-GMO leaders withdraw from ‘Great Biotech Debate’; Forum will go on.

The refusal of these movement luminaries to jump in the ring and defend their strong anti-GMO position is a let down to say the least.

Let’s move on to question two.

What does it say about a movement when some of its loudest voices freely circulate highly sensationalized but completely unsubstantiated data – yet refuse to stand up to challenges from mainstream science to confirm that data?

This question harkens back to March 15 of this year and the now infamous “Stunning corn report” originally posted by Moms Across America, a very vocal branch of the anti-GMO tree.  After its initial posting, the corn comparison table was widely syndicated throughout the blogosphere, and I do mean widely.  Ideal fodder for the GMO bashing I-told-you-soes, every major anti-GMO website picked it up and ran with it, including Mercola.com which has wide circulation and is cited as gospel by its loyal followers.

Skeptoid’s Josh DeWald, known for exposing psuedo-science in Mercola articles, wrote: Given that the study […], has little to no methodological information other than the (corn) fields being “side by side”, it strikes me as irresponsible to use it as the source for an article that will potentially be read by thousands or hundreds of thousands of people.  Actually Josh, maybe more like millions when it’s all said and done.

DeWald wasn’t the only one who had issues with the report.  Kevin Folta (mentioned above) blogged that the data couldn’t possibly reflect corn of any kind but was most likely soil data if it was indeed any kind of real data at all.  Concerning the data, Folta humorously wrote, “Wait a minute… there’s more copper, zinc and iron than carbon in a corn kernel?  What?”  For the full post see Folta’s blog Illumination/Anti-GMO Data Stokes Alarm.

Folta recently revisited this corn comparison on his blog in an attempt to settle this matter once and for all via a re.  The idea was to design and carry out a test that could be replicated in multiple locations.  Moms Across America founder Zen Honeycut, Howard Vlieger (the person who supposedly conducted the original test) and the other interested parties were invited to participate.   Things started to turn wishy washy during the initial emails and finally the entire group backed away from the redo entirely.  The record is all there at Illumination.  Starting with Verifying Stunning Corn Data, you can follow the story on Folta’s blog.

Again, this to me is another disappointment on the part of the anti-GMO movement.  Hey guys, if you’re so sure your corn table is correct, why not agree to try to replicate the data?  That’s how science gets taken seriously.  Needless to say, in the meantime this corn report has scared millions of people worldwide into thinking GM corn is not only lower in nutrition, but actually toxic.

Perfect segue into the third and final question.

What does it say about a movement when activists march on city streets carrying signs that are deliberately designed to scare people with skewed, false or unrelated data – and they don’t even know it?

The most recent iteration of the movement was the “March Against Monsanto” (MAM) event which happened this past Saturday, May 25.  Some 436 cities and 52 countries worldwide were involved and I considered attending the Portland rally to take in the costumes and signs and snap some photos, but it was very far across town for me and I really needed to get my hair done so I got a cut and weave instead.

Some of the signs carried in this global effort were constructive in their asking for labeling and more transparency about what is in our food.  Others, however, were just plain wrong or misleading.  Granted, some, like the one pictured left score an eleven in cuteness but of course, placing any sign in the hands of an adorable little girl is going to melt hearts.

In one photo there was another cute little girl on her father’s shoulders carrying a sign that read GMOs are not healthy for children and other living things.  Quite a sweeping statement for such a little girl, even if she is on daddy’s shoulders.  But where is the evidence to back up such a generality?  In many cities,  Save the Bees signs were peppered in with the Monsanto signs.  The photo below, taken in Salt Lake City, shows a young woman carrying a Bee Killer sign.  Do activists know that there is NO evidence linking bee die off or Colony Collapse Disorder to GMOs? (see related blog post in Discover)

There was a well dressed gentleman marching in Los Angeles with a gas mask over his face.  Nice effect.  Does he know that there is evidence that pesticide use has declined because of GMOs?  (See In Their Own Words:  Farmers Weigh In On GMOs) In South Africa, a tribesman clad in traditional garb wielded a sign that read:  Monsatan – famine, poison and disease.  Yikes!

(Images described above can be seen here and here).

It’s interesting to note that much, if not all of this protesting and marching was going on sans input from farmers who actually use Monsanto seeds.  I saw a few Save our farms signs but did anyone bother to ask any farmers how they actually feel about GMOs or Monsanto?  Click the links below to find out.

A Rebuttal to the Monsanto Protesters

In Their Own Words:  Farmers Weigh In On GMOs

If you’re a farmer who supports the March Against Monsanto, I welcome your perspective and would love to hear from you in the comment section.

In conclusion, I’d like to reaffirm that my answers to these three questions led me away from the anti-GMO movement, and I haven’t regretted the about face for even a moment.  May I go out on a limb and suggest that it’s a terrible waste of time and resources to bark up the wrong tree?  As a sleuth, I want to get to the heart of health issues with the full support of evidence.

The timeline of my going from anti-GM to pro-science is in tact and well documented here on Sleuth4Health (see Why This Blog and Why Do I Care So Much?).  If you’re interested in reading how the conversion conversion happened, read Science Is Laughing At Us or How To Temper A GMO Blogger:  My Story.

38 responses to “The Anti-GMO Movement Continues To Disappoint”